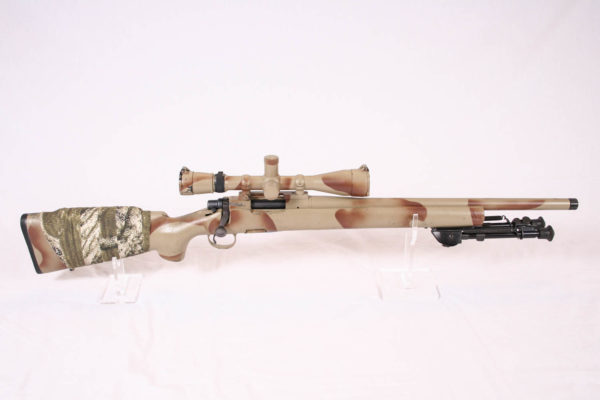 Only 1 left in stock

This Remington 700P was a trade in rifle from a police department that upgraded there rifles. This is a modified 700P that has seen years of department use and while it has been used, it still looks to be in very nice shape with plenty of life left. The bolt is lightly worn and the rifling is still good. We tested the headspace on the rifle and it checks out good, but we have not fired the rifle so cannot comment on its accuracy. The rifle has the Remington DBM with the pinch release setup. The paint on the rifle was how the department turned it in to use and while it is standard spray paint, it actually looks well done. Some of the paint has worn off in places, but overall it still looks good. For nostalgia, we left the homemade cheek piece on it as well. This appears to be one of the Remington 700P package rifles and it has the leupold base, rings and the Leupold VX-III Tactical 3.5-10x40mm scope with tall turrets and duplex reticle. The caliber is .308 Win. and the modifications include a cut barrel that has been threaded for a suppressor and includes the cap. The barrel was cut to 20″. The rifle does come with an older harris bipod and ships in a Dosko hard case to an FFL dealer only.

Purchased as is without warranty or guarantees.

There are no reviews yet.