Did I read that Accuracy Guarantee correctly? Is this rifle for real? Let me tell you that it is! Not only does it meet the accuracy guarantee, but it exceeds it, and that is with standard Federal Gold Medal Match 168gr, not handloads. Take a look at this 3-shot group that was shot in less then ideal conditions, at a rapid pace. Granted, things were clicking for that particular group, but sub .25 MOA is not a problem. Here is a photo of a group I shot at a recent review outing with the tango-51. It measured .22" center to center, and was shot on a hot day in So Cal, fighting mirage.

The rifle was featured in the April 2000 issue of SWAT magazine, where they stated "The Tango-51 is the most accurate rifle of its type that the author has ever fired". I have fired a LOT of different sniper rifles, and I would have to agree with the above statement. Several rifles I've fired will get down to .25 on occasion, but I was consistently doing it all day with the tango.

The rifle is based on a Remington 700 action that is blue printed to Tac-Ops specs. They use their own Tac-Ops stainless steel or chrome-molly match grade barrel. The head-space is adjusted to .001" or less. Tac-Ops also uses their own custom precision ground recoil lug. The standard remington trigger is jeweled and adjusted to a crisp 2.5 lbs. All metal parts on the rifle are finished with Bridsongs proprietary Green-T® and Black-T® finish which can be seen in the closeup shot below. 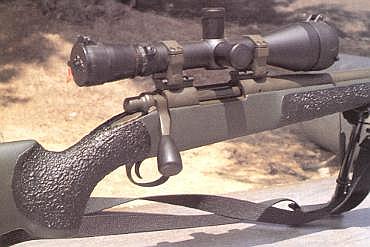 The stock is painted with an epoxy paint, and texture is applied if requested (this can also be seen in the picture above). A large bolt handle is standard (which I wish was more common on other sniper rifles). A lot of work goes into building these rifles, and the article in SWAT magazine goes into it fairly detailed, so I wont do it here. You can read the SWAT article at Tactical Operations home page tacticaloperations.com

These rifles are EXTREMELY accurate, and user friendly. Several large agencies both Federal and local have adopted the Tango-51 as their standard sniper rifle. One of these is the Los Angeles County Sheriffs Special Enforcement Bureau (SEB). They average about 200 call outs per year, and are one of the premier "Tactical" teams in the world. The SEB chose the Tango-51 because of its accuracy and ergonomics. I've talked with the head armorer at SEB, and he is extremely pleased with the performance of the rifles in the field. I've included several pics below of the SEB in action with the Tango.

On my review trip to tactical operations facility, I was able to shoot a tango-51 with and without a suppressor, plus several of their other weapons (silenced Berretta 92FS, silenced .22, suppressed M4, etc). The tango-51 perform flawlessly, and was deadly accurate. If I did my part, it did also. The mirage was playing tricks, especially if I fired anything more then about 3 shots with the can on. But thats always been a problem with suppressors on hot days when using optics. The suppressor did change point of impact about 3 MOA when you added or removed it. But it was the same everytime, just another entry to have in your logbook. Accuracy (when you were not fighting the mirage) was the same with or without the can. Some shooters shoot better with the can on because there is less noise to startle you, but I shot the same with or without it. The action is very smooth, and there was not the very stiff closing of the bolt normally found with rifles with tight action tolerences. The large bolt handle is very comfortable, and I wish they were on more rifles. (Tac-Ops will do it to a standard remington bolt if requested). Overall, the finish was stellar, the attention to detail on these rifles is amazing. While I was there, I was able to look at several rifles in the construction process and was very impressed. Nothing is overlooked with these rifles.

Am I impressed with these weapons? Yah, thats probably an understatement. I especially like their Bravo-51 that uses the McMillan McHale stock. In fact, I am impressed enough with the Tango-51 that I have not only decided to buy one, but have decided to go ahead and list their prices here on snipercentral. There is a new bar of excellence that top end rifles must try to meet. If you are interested in purchasing a Tango-51 for your agency, or for personal use, please click below.

Berretta 92FS Suppressors are tac-ops specialty
Back to rifles list