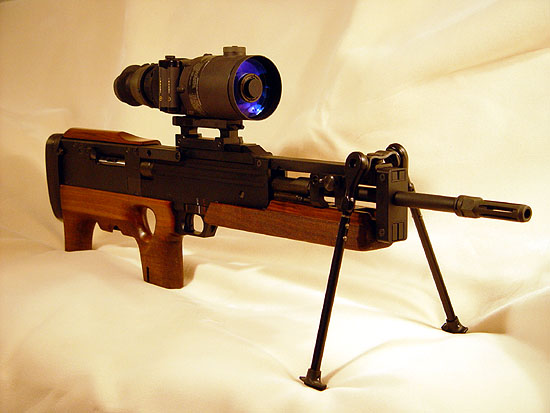 Thanks to Ira for the photos of the WA2000 from his personal collection.

Can someone say "DREAM RIFLE"? My personally favorite sniper rifle is the Parker-Hale M85, but the WA2000 sure ranks up there on my wish list, and there is probably no other rifle that conjures up imaginations like the WA2000. This rifle was designed from the ground up as a sniper rifle, it is not an adaptation from an existing rifle. No expenses were spared in the design and construction of the WA2000, which may have been what ultimately doomed the rifle. The retail cost when new (in the 80's) was $12,500. The .300 was choosen as the primary caliber because of its long range accuracy and its consistancy at all ranges. The entire rifle is designed around the barrel. The adjustable trigger operates a hammer, and the entire firing machanism can be removed as a unit from the lower frame. The bullpup configuration allows a compact design while still maintaining a 26" barrel. The US Army M24 has a 24" barrel and is over 7" longer. The WA2000 fires from a closed bolt and uses a bolt with 7 locking lugs. Only 72 total rifles were produced in 2 different variants of which there were only approximately 15 imported into the USA.

The first model had problems with the gas blowback system and was soon revamped to the series 2. The 2nd generation (series) was refined with a more robust gas system which also reduced the recoil and a more effective flash hider was added in adition to an upgraded bi-pod. The fluted barrel was also eliminated on the series 2 rifles. The combination of the new gas system and the non fluted barrel made the second generation rifles more accurate than the first generation. The only fault I have with the weapon is its heavy weight. At 16 lbs its really getting up there. Accuracy is exceptional. Its easiest to tell the two variants apart by the two different flash suppressors. The "can" type flash suppressor is on the first generation, and the more traditional flash suppressor is of the 2nd gen. The 2nd gen rifles incorporated several changes to make the rifle more suited to its intended job. Even if its heavy, the WA2000 is still an amazing rifle as both a sniper rifle, and a piece of art, current value of these rifles range from $30,000 - $40,000

Update!! Wait! The plot thickens! I received this email from a reader:

"On August 24, or today, I actually talked with Earl J. Sheehan, Jr., President of Carl Walther here in the U.S. I thought you guys could use a little more info on the gun so here it is. The rifle was produced from the late 70's though November 1988. The final retail cost for a base rifle in 1988 was in the range of $9,000 not $12, 500 like you have written on your page. He said the price never went that high while in production. That document that you have must be extremely old because there were more than 72 produced. Earl told me that there were precisely 176 WA2000's produced total. He also told me that there are only 15 units in the U.S., and that he owns 11 of them, and only one other party owns the other 4. The most amazing thing to me having this conversation though was that he offered me one of the rifles to purchase. He offered me one NIB (new in box) for approximately $75,000! YIKES! Any ways I saw that this was your dream rifle, thought I'd let you know that you can still get one from the guys at www.carlwalther.com if you have a spare 75k sitting around."

There you have it... some more interesting information to add to the mystery known as the WA2000.